A couple of crap jokes:

BBC News: Robot slugkiller ready to roll
A hi-tech method of ridding the world of the evil that is slug, but is it as effective as my own decidedly low-tech method? 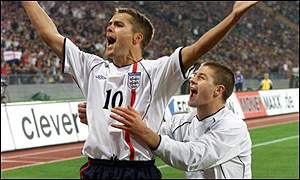 Liverpool 5 : Germany 1
Ludwig van Beethoven, Martin Luther, Helmut Kohl, Wolfgang Petersen, can you hear me? Your lads took one hell of a beating!