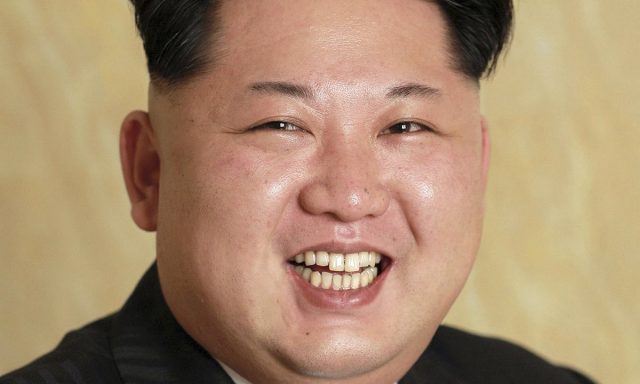 You can say what you like about Kim Jong-un—unless you live in North Korea, obviously—but he certainly comes across as one cheerful tyrant. On the toothy-grin front, he knocks the rest into a cocked hat.

Nicolae Ceaușescu, for one, took himself far too seriously. Never cracked his face, by all accounts. And look how he ended up. Then there was Pol Pot: another total misery-guts. Augusto Pinochet did his best: he'd spend hours in front of the mirror practising his engaging grin, but it didn't sit at all well beneath that general's hat of his. Bashar al-Assad, well, quite frankly, he doesn't have the teeth for it. And as for Idi Amin, the expression on his face most of the time was as if somebody had let one off nearby, but he was too polite to mention it. True, once in a while, Benito Mussolini would attempt a real face-splitter, but he could never pull it off and ended up looking totally mental.

Which is why the North Korean leader's latest official portrait is such a breath of fresh air. You look at that photo, and you think there's one happy man! There's a chap who knows how to say ‘cheese’.

I can't help thinking other tyrants are missing a trick. All their aloof seriousness is getting them a bad press. They would come across as far more sympathetic and approachable if they took a leaf from Kim Jong-un's book and lightened up a bit. Show us your teeth, chaps! A smile is an umbrella.

“…wonderfully droll, witty and entertaining… At their best Carter’s moorland walks and his meandering intellectual talk are part of a single, deeply coherent enterprise: a restless inquiry into the meaning of place and the nature of self.”
—Mark Cocker, author and naturalist