BBC: Conservatives agree pact with DUP to support May government 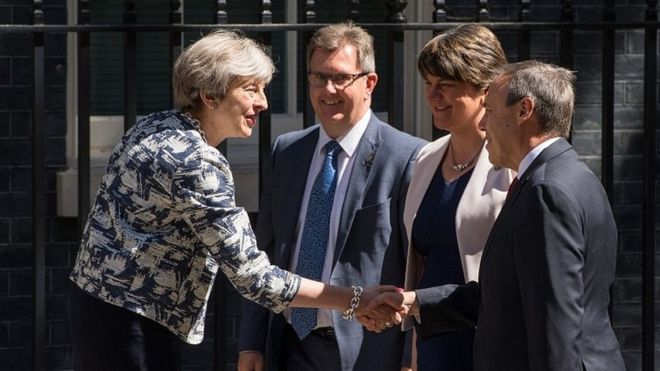 An agreement has been reached which will see the Democratic Unionist Party back Theresa May’s minority government.
The deal, which comes two weeks after the election resulted in a hung Parliament, will see the 10 DUP MPs back the Tories in key Commons votes.
There will be £1bn extra for Northern Ireland over the next two years.

The Brussels Brexit negotiators must be shitting bricks.

Actually, I think Theresa May might have played a blinder here: when you haven't a leg to stand on, acting insane is probably your best strategy for getting people to fall for your bluffs: she might actually be that crazy.

Richard Carter’s fascinating exploration of his local grouse-moor in West Yorkshire digs deep into natural history, human history, prehistory, and the history of science. His writing is grounded, insightful, and frequently hilarious, and he shows how falling in love with your own local patch can be a gateway to the whole world.
—Neil Ansell, author and journalist